Quick post today.  A couple of days ago, a nice man came into the gas station with a hand full of serpentine belt (for those unfamiliar with cars, it’s one of those rubber-band looking things in your engine that makes it difficult to drive if it shreds into a million pieces).  His van was parked in our lot, and he asked me if it was okay to keep the vehicle there overnight until a tow truck could come get it in the morning.

It had already been there in the lot for a few hours, and I had wondered whose it was.  I distinctly noticed that this man was wearing a red shirt with Elmo’s face printed on it.  He noticed me staring at it during our conversation, and he explained that he would have come in earlier, but that there was a Sesame Street thing going on at the local civic center and that he didn’t want to have his kids miss it.  He got another ride, and then came back to explain why his van was sitting there.

I told him that it was perfectly fine for it to sit there overnight.  It wasn’t hurting anyone, and I’ve been through the exact same situation before (except for the Elmo shirt part).  He thanked me and left the store.

About an hour later, I saw him transferring things from his van to another car.  It was slow in the store so I decided to go out and see if he needed any help.  I struck up another conversation with him, and I learned that he’s an artist.  He showed me some of his work, and he even gave me a piece to keep because I let his van stay there.  His work is really cool: 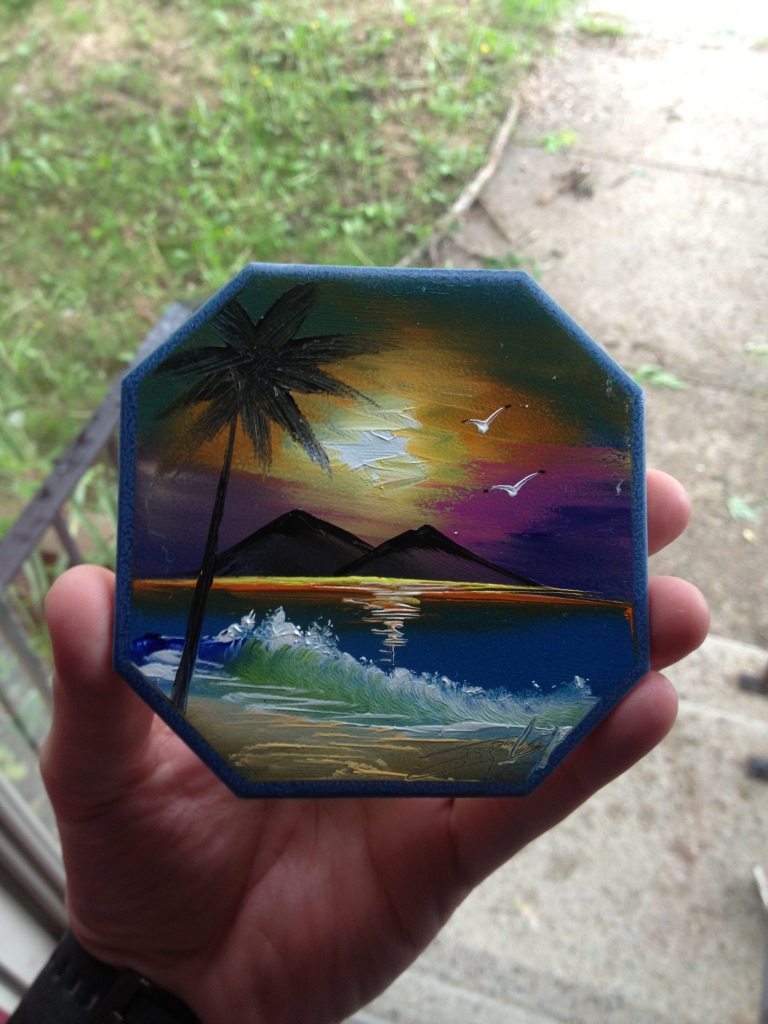 His work is all done with fingers.  No brushes.  It’s really colorful.  The one in the picture is the one he gave me.  It’s painted on a tile with a little hanger on the back.  His name is Israel Lopez Arenas, and he’s an artist out of Mexico.  He’s living here in Iowa now, selling his work at festivals and fairs and other events.  The recent rains has made it tough on him, but he’s super nice and I like his work.  I recommend you check him out.  You can click here to see his work and read his story and see his family.

iThere are no comments