I know, I know.  Saturdays are supposed to be for my artistic writing endeavors.  I’ve decided to expand it to any kind of artistic endeavor at all.  That includes making beer.  About a month and a half ago, I had a post about brewing a beer.  Well, it’s been a while, and the fermenting has finished, and it has come time to keg the beer.

Between the initial brew and now, I did a few things (some of which I have no pictures of, because it’s kind of boring to look at).  First, I siphoned the beer from the first glass jar (the primary fermentor) into another glass jar (the secondary fermentor).  There are two reasons to do this.  In the primary fermentor, the yeast is at the most active.  They reproduce and just go nuts on all the sugar that you gave them.  They reward you with alcohol in the end.  Also, after it’s all finished, the majority of the yeast cells die and settle to the bottom.

I siphoned the beer off the layer of yeast cells (by now an inch or two thick) so it wouldn’t acquire an “off” flavor.  Also, the secondary fermentor is when I add my apricot puree.  There’s enough sugar in the apricots to activate the remaining yeast into another round of fermentation.  Also, a period of time is needed for the flavor and essence of the apricots to permeate the beer.

Once that was finished, it was time to filter the beer.  Nothing super crazy here.  Just want to keep out chunks of apricot and other things out of the finished product.

I siphoned the beer from the secondary fermentor into a 5-gallon keg.  I closed it and pressurized it with Carbon Dioxide. 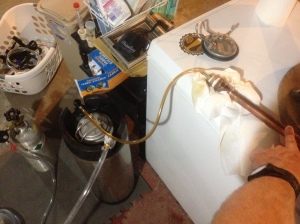 Then I just ran it through my rig.  It’s goes through a household water filter.  Check out the color of the beer as it goes through the filter!  It’s filling up another keg, where it will live its life.

The final keg will be pressurized with CO2 as well.  For a few days, the CO2 will dissolve into the beer, making it fizzy.  In order to hold in that pressure, the keg needs to be tightly sealed.  There are thick rubber O-rings on the lid, and we slather on a sticky, viscous layer of Keg Lube. 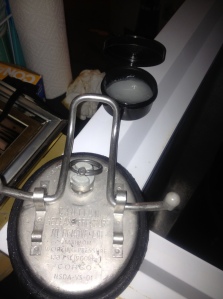 Then I set it in my freezer, which I’ve temperature controlled so it never actually freezes.  I have room for two kegs, a CO2 canister, and a CO2 manifold.  If I really needed to, I could cram another keg in there. 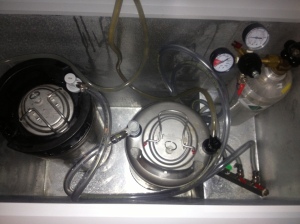 Once it’s ready, I just need to head to the basement for beer on tap.  Bottoms up! 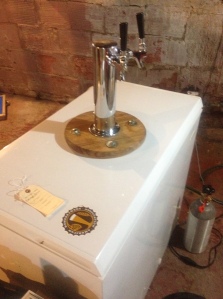